Does Agile work with Remote Teams? 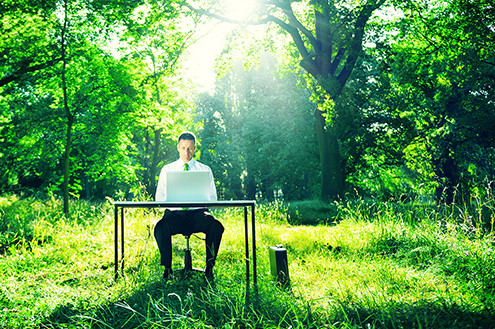 Has the new remote positioning of the workforce provoked the departure of the Agile team?

It has been more than a year since a microscopic organism called the “novel coronavirus” completely redefined the way companies all over the globe position their workforce. This David and Goliath tale couldn’t exemplify better how the smallest of creatures can have great authority over the largest economic entities of the globe. This repositioning of the employees to remote work locations, which started as a temporary measure to assure continuity in the face of the globe’s worst pandemic, has transitioned almost imperceptibly into a permanent transformation of the workplace.

Alongside the obvious changes to the workplace itself, there are also inescapable changes to some of our core methodologies. Agile is a good example of how the team structure in organizations was previously aligned with rapid and iterative communication. The Agile ceremonies have always envisioned quick in-person meetings. So, has the new remote positioning of the workforce provoked the departure of the Agile team?

Technology to the Rescue / Demise

Agile has been around for a while with some components and ideas showing up as early as the 1970s and 1980s. By the time the Agile Manifesto was published in 2001, the developers that contributed were aware of the technological communication capabilities of the early 21st century but were still basing some of their conclusions on earlier decades of personal experience with the technological capabilities of the late 1900s.

There are 12 principles outlined in the original manifesto, and the one most pertinent to this examination is the one that states, “The most efficient and effective method of conveying information to and within a development team is face-to-face conversation.” Ouch, that’s a wrap then… Agile has officially left the room? Not necessarily, remember the state of communication technology two decades ago.

We’ve all heard that communication is 90% non-verbal. However, knowing that 50% of statistics are wrong and the remaining 70% are just plain made-up, I would take that with a healthy grain of salt. There is, in most cases, quite a bit of information that isn’t captured in the words of an email. Vehement head-nodding signaling passionate agreement, the awkward silence that follows your brightest of ideas, or even a well-intentioned joke—like the one I literally just made about statistics—don’t always translate well in email. And, if you now take up the banner of emoticons, know that I am still trying to decipher the “banana, banana, monkey, palm tree” sequence from an email I got 3 weeks ago.

In his book “Agile Software Development,” Alistair Cockburn [1] classifies forms of communication by mapping both the communication effectiveness and the richness of the channel. It is no surprise that face-to-face communication scores high on both when it comes to a question-and-answer style conversation.

I find it thought-provoking to consider the extra richness and capabilities the new communication tools—such as video conferencing—have added since the inception of the Agile Manifesto. It must make one wonder if the development team would have deemed “Video Meeting” an adequate level of richness to meet the “face-to-face” mandate on principle 6.

There are good reasons to use each of these forms of communication, but in the past Agile has—perhaps mistakenly so—relied primarily on synchronous communication. Synchronous communication can waste a lot of resources when no answer is needed or if the answer does not have to be given instantaneously. As an example, the question “Can you read this 100-page report and give me some feedback?” would not get any benefit from a face-to-face setting. On the other hand, the answer to that same question could surely benefit from a face-to-face review session after ample time to read the report in-depth.

Jeff Bezos famously makes his staff write a long narrative-structured memo for each meeting, and he says that it was the “smartest thing we ever did at Amazon.” He wants his people to think deeply, and not have shallow debates in which they go in circles. His reason is that complex issues require a level of structure that only comes with the process of writing. Collaboration occurs only after each person has written their thoughts down, in entirety. Interesting idea, and—because of blog writing—I can relate to the fact that putting ideas down on paper allows for clarity, depth, and structure that face-to-face conversation rarely encourages.

I’ve personally spent a lot of time in Agile face-to-face ceremony meetings, albeit mostly while using video conferencing tools because my team was geographically distributed. While the in-person interaction works well during some of the ceremony elements, it doesn’t add anything during others. Agile hasn’t spent much time in the past trying to figure out the best use of synchronous vs. asynchronous communication, in part by the somewhat rigid interpretation of the face-to-face principle.

Undoubtedly, the COVID-19 forced and accelerated evolution of its communication style will not doom the Agile team but will instead encourage it to reevaluate some of the principles that underpin Agile. Effective communication of complex issues can only be based on a complex, multi-faceted, and coordinated use of all the communication methods we have at our disposal two decades after the inception of the Manifesto.

Effective communication should be seen as a protracted process that involves carefully timed phases of writing, reading, talking as well as listening. Each of these phases of the process fit in various portions of the Agile timeline, and as such, these portions should rely on the most appropriate choice of communication methods. Remote work has encouraged the rapid spread of some of these new methods and has shown the weaknesses that were previously hidden by only using face-to-face and synchronous methods.

Gitlab is pushing itself to embrace an asynchronous communication style —which they have dubbed Async 3.0 [2]—wherever it fits. Large companies like Gitlab are concluding that to be able to leverage a global and remote workforce, one must accept the reality that real-time meetings that include everyone can simply not be the norm of communication. They have carefully examined different activities—including their Agile process—and mapped the async communication opportunities to each.

Asynchronous communication is a significant differentiator in a world where businesses are increasingly remote. When implemented correctly and in conjunction with an adapted Agile process, the resulting new communication flow is superior to what we had with an on-prem workforce. This premise is of course based on a foundation of solid implementations of the modern tools. You’ll need to enable the remote workforce by giving them the tools for the trade. No remote worker is going to succeed with the use of an old dial phone on their desk—although it does make for a great conversation starter on the desk of an on-prem worker.

Keeping up with the pace of innovation in the remote worker’s toolbox is going to be a differentiator between trying and succeeding, and the usual enablers like automation and VDI are not going to be strangers to the practical implementation.

And then finally, stay watchful for the evolution in the Agile processes. This is a particular call-out to the scrum masters among my readers. Leading the charge in the synchronous to asynchronous style transformation of the Agile ceremony could mean the difference between success or failure in your company’s next Agile project with a remote team.

You can read more about Agile Infrastructure in our white paper: C-Level's Guide to Technology Innovation.